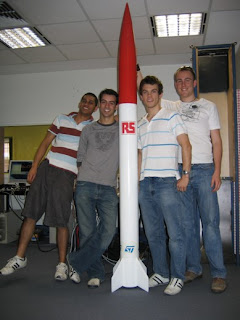 The Pathfinder 01 airframe was completed and shipped to South Australia on the 23rd of October for display at the end of year undergraduate expo's at both Adelaide & Flinders Universities. Displayed in the above picture minus the payload compartment is Pathfinder with Adelaide University (UoA) student team left to right: M. Pathmanathan S. Barone S.M. Wilksch A. Thomas 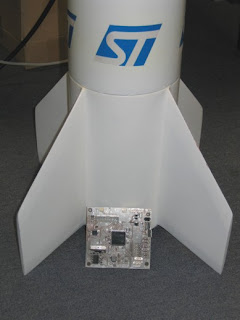 Above is the version 0.1 Recovery Controller (RC) developed by the UoA team, next to the Pathfinder rocket for scale. It is based on the powerful and flexible STR71 ARM MCU, which was chosen for its processing power along with the myriad of interfaces on chip. The unit provides barometric altitude in combination with a 3 axis accelerometer with +/- 50g x,y axis & 100g z axis. Interface to the main flight computer is via serial link, with the option of CAN and or USB. A PC104 form factor was chosen to allow ease of integration through a stackable board standard. Additional 18bit analog channels are available via pin headers onboard, which allow further vehicle discrete measurements.

The generous support of ST Microelectronics with development tools, and MCU's made possible the rapid development of a first generation hardware solution.
Posted by ASLI2007 at 4:35 pm 1 comment:

The Pathfinder airframe is now at about 70% complete, the phenolic body tubes have been fully laminated using a seamless glass weave sock. Sourced from Aerosleeve.com in the U.S. 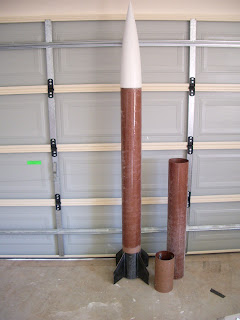 As can be seen below the fin unit is near complete and consist of a phenolic tube core, with 4 MDF diamond aerofoil cores. Over which has been applied a first layer of uni-directional carbon, a sencond layer of light glass bi-directional mat is to be applied. 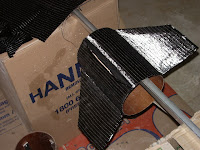 The Pathfinder is currently undergoing final finishing and will be painted ready for display at the end of year expos for both Adelaide and Flinders Universities.

A revised launch plan has been drafted which will see a low fidelity launch on a commercial Hypertek hybrid motor, from a launch site in Queensland. The full briefing document for the launch will be available from this blog page by the first week of November.
Posted by ASLI2007 at 10:35 am No comments:

The University of Adelaide Team has produced a prototype board based on the STR710. This was necessary to test tooling at the university and basic hardware concepts. 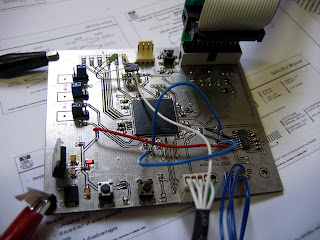 The PCB was manufactured at the University by the technical staff and loaded by a student team member. During testing some minor errors were noted. The PCB was modified and a fully functional circuit was yielded. 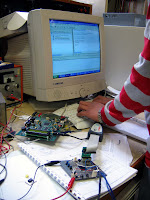 As the prototype has been tested successfully, the PC104 Recovery Controller can now be manufactured confidently knowing the basic hardware has been validated.
When the Recovery Controller is completed it will undergo initial testing with a PC, followed by integration to the central Flight Computer (FC).

The Linux based flight computer code is being developed, for use on the Arcom Vulcan XScale board. Integration and testing of a wireless telemetry using 900Mhz spread spectrum transmitters, will be conducted using Aerocomm data modems supplied by Tekdis.
To help speed implementation the team decided to use a PC104 carrier card from embedded arm to interface the Aerocomm modem directly to the Vulcan PC104 data bus.
Posted by ASLI2007 at 11:38 am 1 comment:

ASLI2007
This blog charts the development of the Pathfinder 1B launch vehicle for carrying academic research projects. 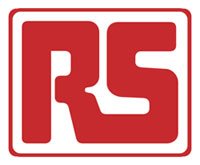